There’s a new trend in town: negative SEO schemes. You receive a seedy email stating that you’ll get thousands of bad links to your website if you don’t pay.

What does this mean? Companies are building lots of spammy links to competitors’ website, aiming to tank their search engines rankings. The reason why this can be damaging search engine visibility is to link to Google’s Penguin algorithm, that aims to detect and penalize websites full of spammy inbound links, because it could mean an attempt to manipulate search engine rankings.

While years ago online visibility was totally based on getting as many inbound link as possible, regardless of quality or relevance, and this tendency started to clog search results. Users’ complaints led Google to develop a new algorithm, thus effectively erasing the effectiveness of building a lot of links, and even damaging online visibility.

But this meant, also, that is totally possible to affect competitors’ search engine visibility by adopting the same tactics that were once useful, making way for mercenary companies and the new field of “negative SEO”. 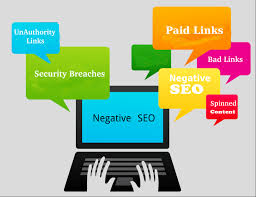 Google takes the concept of negative SEO seriously, like it emerges in the Webmaster video, where Matt Cutts (part of the Google webspam team) says they are aware of the potential abuse and they have built safeguards in order to prevent it.

They’re convinced, though, that it doesn’t represent a major concern because, while a lot of people talk about it, not many are actually trying it and fewer still who succeed it. In short, lots of people talking about it but no actual attacks.

But if you’re still concerned, there’s the disavow tool to protect webmasters from negative SEO. 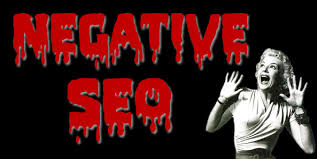 This service is included in Google Webmaster Tools as a way to notify Google itself of illegitimate or unwanted inbound links, that should be ignored. Webmasters shouldn’t have to wait until they have manual action against them to use it though. Cutts encouraged website owners to use the tool if they’re worried about their link profile.

The main thing to do is check your Google webmaster account for messages notifying you that “some pages may be using techniques that are outside Google Webmaster Guidelines”, then tell Google to ignore unwanted links.

What Google does is enough?

With the introduction of the disavow tool, Google is giving back power directly to the owners. But how effective is it really? People have claimed that it doesn’t make a difference; while others state that it’s just a way for Google to let others do the work for them.

Still, if you receive an email threatening to use negative SEO, ignore it and then keep a close watch on your inbound link profile on Google Webmaster Tool.